Gas, Italy’s plan: 7 regasification terminals and five pipelines from the south to become the center of the Mediterranean 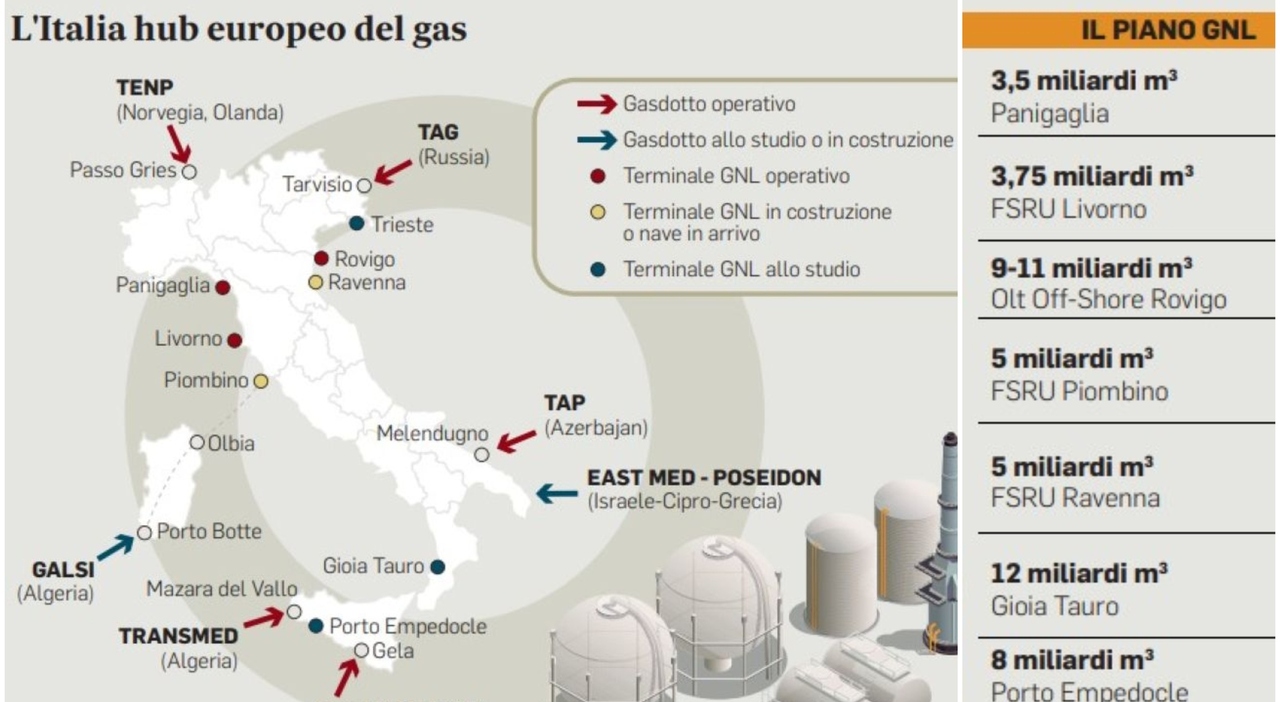 Five years to goItaly thehubs European of mediterranean with seven regasification terminals I five gas pipelines from the South, between Africa, Israel and Azerbaijan, three in operation and two in pipeline, and pass through our country something like 50,000 million cubic meters of liquefied natural gas (LNG) and up to 90,000 million gas, at full capacity. In total about 140,000 million cubic meters, according to the estimates circulating on the government table, which do not take into account at least 7,000 million of national production. According to the plan to the attention of Georgia Meloni, recently from a mission in Algeria, would be enough to satisfy household consumption, 72,000 million cubic meters, which will however be reduced thanks to renewables, and to sell the excess abroad. Also in Germany. Without having to count on the 7,000 million from Norway and to be able to file the 29,000 million from Russia. Someone says that the prime minister could succeed in the enterprise even earlier, if he prints the turbo put by Germany. In the last thirty days alone, Berlin has inaugurated three floating regasification terminals in a project involving 6 vessels of 30 billion cubic meters.

The treasure is in the Mediterranean. But to capture it, infrastructure is needed, the network to bring it to European homes, where hydrogen will also pass in the future. And, therefore, it will be necessary to play all the cards quickly, tightening the authorizations and the bureaucracy to play the European game as protagonists. Precise guidelines that will also be contained in the new Pniec in progress and in the adaptation of the Pnrr to RepowerEu.
To reach that “redundancy of infrastructure that keeps prices lower”, invoked for months by ENI’s chief executive, Claudio Descalzi, it is necessary to immediately restart the construction works of the regasification terminals in the south, with an agreement on the territory in Enel’s Porto Empedocle, capable of transporting 8 billion cubic meters, and that of Gioia Tauro in Sorgenia and Iren between 8 and 12 billion cubic meters, both authorized and blocked for decades. Environment Minister Picetto Fratin said it clearly when he illustrated the programmatic lines of the ministry at the end of the year. Along with doubling the tap, capable of bringing gas from Azerbaijan up to 20 billion cubic meters, the two sites are at the forefront of the government’s thoughts. But making agreements in Africa is not enough if gas and LNG get stuck in the bottlenecks of the Adriatic line, in the Abruzzo region, and do not reach the North.

Snam’s 2.4 billion investment will have to be repaid in two to three years, at the same time as the regasification terminals in the South. No time for vetoes. Meanwhile, the floating boat Piombino should be ready in May. Then that of Ravenna, in 2024 (5 thousand cubic meters each). Also in Sicily, in Mazara del Vallo, the largest contribution is expected from Algeria, which in a few years intends to bring the current 22,000 million to the maximum capacity of the Transmed gas pipeline, 36,000 million. But Sonatrach’s export potential also comes from LNG and the pipeline that will pass through Sardinia (Galsi), considered the country’s firepower of around 160,000 million. To date, the three regasification terminals, Panigaglia, Livorno and Rovigo have received LNG from Qatar, USA, Egypt, Trinidad and Tobago, Nigeria and Norway up to capacity. New supplies, including from Qatar and the Congo, will have to find other ways. Libyan gas, on the other hand, comes from the Green Stream, while the potential of Eastemed-Poseidon, which already connects Israel, Greece and Cyprus, is still on paper. Another urgent business for a European hub.