Pnrr, here are all the delays: Lazio and the South in trouble. But Rome is saved 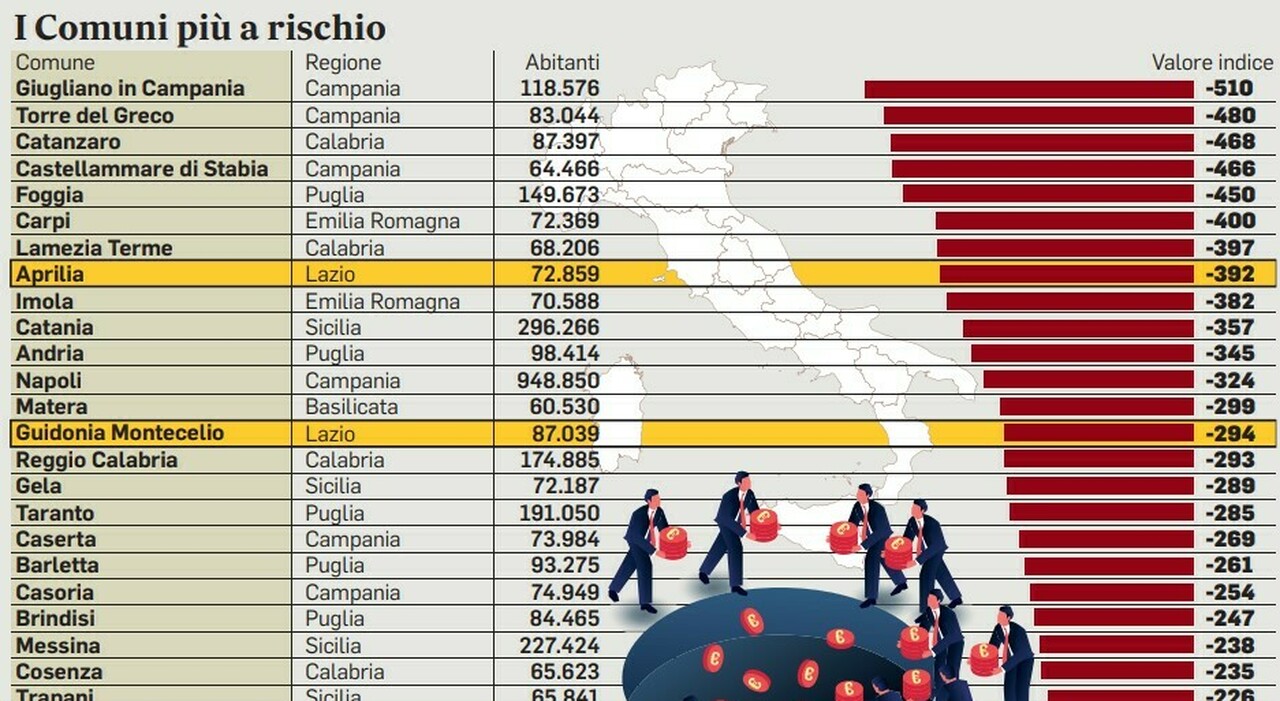 At noon, as expected. But also some municipalities in the north and much of Lazio. It is a known fact that the Italian administrations arrived with problems at the appointment with the Pnrr. A study carried out by Professor Gianfranco Viesti of the University of Bari and commissioned by the “Con il Sud” Foundation allows us to deepen and measure the critical problems in centers of more than 60,000 inhabitants. Naples, Brindisi, Taranto, Reggio Calabria, Messina, Catania and Trapani are the cities with the most problems, while Trieste and Trento are on the opposite side of the ranking, that is, in a relatively easy position in the management of the Plan.

However, among the provincial capitals that are in the weaker range there is also Latina and two large centers of Lazio, Aprilia and Guidonia Montecelio, also appear. Whereas in the second “quartile”, that of municipalities with values ​​closer to the averages but still in a critical situation, are Viterbo and Pomezia. Rome, on the other hand, along with Milan, Turin and Genoa, is in the third group, so it is part of the administrations that, even in a complicated context, can look at the challenge of European funds with a little calmness. litter .

The general scenario is that of municipal administrations that, globally, have constantly lost workers: between 2007 and 2020 the national drop was 27 percent, with a trend that, however, is decidedly more accentuated in the South and the islands Viesti’s analysis focuses on the municipalities that had more than 60,000 inhabitants in 2019: there are 103 in total, of which 24 are not provincial capitals, and bring together 18.4 million inhabitants, i.e. just under a third of the total Italian population. The quantitative aspect is already relevant in itself, because administrations with scarce human resources are in difficulties from the outset. But then there are the qualitative elements, that is to say, the preparation of employees with respect to the tasks that await them, innovative in many aspects and, in any case, linked to a deadline that European regulations tighten.

How was the indicator constructed then? Five variables are taken into account: the number of employees in 2019, which is compared with the population and produces an endowment index; the variation in the ratio between employees and population between 2008 and 2019, with which we arrive at an index of personnel variation; the percentage of qualified employees over the total number of permanent employees, which gives the educational qualification index of the staff; the percentage of people under 50, that is, the age index of employees; and finally the percentage of managers, from which we arrive at the staff qualification index. All these values ​​are compared with the averages of medium and large municipalities (that is, of more than 250,000 inhabitants) and are ultimately negative or positive: a negative number indicates a greater criticality than the average, while a positive one indicates a better situation

In the worst quartile, as has been said, are all the southern administrations with the exception of the three of Lazio and Carpi and Imola, in Emilia-Romagna. The municipality with the worst absolute indicator is Giugliano in Campania, followed by Torre del Greco. On the contrary, at the top of the ranking there are mainly cities from the North, some from Tuscany and the Marches; a very special case is L’Aquila, because the capital of Abruzzo suffered significant changes in its personnel structure, and therefore in its administrative capacity, following the emergency of the 2009 earthquake.

Rome has a positive value of 72, immediately higher than Milan. Among the individual components of the index, those relating to the number and incidence of managers are negative, while the parameters of personnel change, presence of “young people” and graduates are moderately positive. Returning to the most problematic municipalities, Aprilia (the one in Lazio with the most difficulties, in seventh position in the absolute negative ranking) shows a particularly evident unfavorable value precisely in terms of the number of staff. And the same critical situation is presented in Guidonia Montecelio and Latina.
“The study disproves some clichés about the amount of public administration in the South and, unfortunately, confirms the critical questions regarding the quality – underlined Carlo Borgomeo, president of the “Con il Sud” Foundation – expecting “a col · real collaboration between public and private society”. sectors”.

Minuteman III: What is the missile capable of carrying nuclear warheads? Malmstrom’s American base “has” 150 of them